If your car has been totaled by your insurance company as a total loss due to flood damage then now is the time to start looking at buying your next vehicle.

You might also be wondering what happens with all these cars that have been flooded and do they get resold on used car lots? If that is the case how do I spot one and avoid purchasing a vehicle with potential long-term problems?

OK, you wanted answers we got you some answer on buying a car off a used lot and suspecting it might have had water damage what are the signs.

Signs a Used Car Might Have Been a Flood Car: 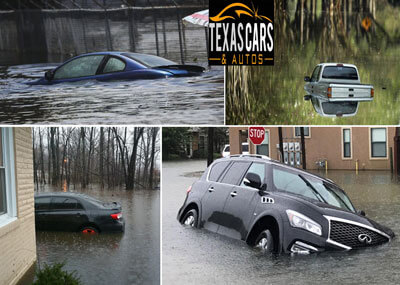 Salvage title – A salvage title could be but does not necessarily indicate that the car has had water damage but it’s a good clue that something catastrophic happened to the vehicle that caused an insurance company to total the car.

What does totaled mean?  – Totaled or salvaged simply means that damages occurred to the vehicle that exceeded the vehicle’s value and therefore the insurance company deemed it only good for salvage. Salvaged title cars are usually great buys if you don’t care about the title part. The best salvage title cars are ones with hail damage. Those cars have simply had too much cosmetic damage to be worth fixing but are usually structurally and mechanically sound. Now a flood car is a different matter. Water plays havoc on electrical systems and sensors and therefore once a car has been deemed a total loss due to flood damage it’s usually best to leave it be.

Odor or Lack thereof – If the interior of a car gets wet and it sits you will start to get a musky odor and that usually indicates that there is mildew due to excess wetness. The other give away is heavy smell good. What I mean is if the car smells like a perfume bottle it may be that the dealer is trying to cover up the musky odor. Now that does not mean that this is necessarily the case but it’s certainly an indicator. Now a little water in a car still makes it repairable and reliable so talk to the dealer and see if the car has had any water in it and to what extent if you suspect that’s the case. Generally, water to the floor boards is considered repairable by most insurance companies but not all. 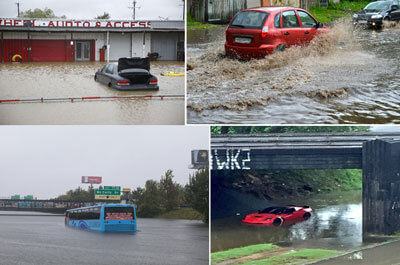 High water marks – If you see marks on the exterior of the vehicle or in the trunk area as well as the quarter panels that indicate water then you’re looking at a car that has been salvaged and has been severely flooded and is likely a flood car that could have long term issues. Once water reaches the glove compartment or crests over the hood of the car then the vehicle is likely to have long term issues. Once water gets in the engine and fills the cylinders there is likely long-term engine damage without a total rebuild of the motor the car will most likely not be reliable. Even more so once water gets into the glove box which is at the level where most modern cars have their computer modules and sensitive electronics long term electrical problems will arise and likely continue to do so.

Salt Water vs Fresh Water is another matter. Salt water is much more corrosive than fresh water. However, flood waters carry god knows what in them so they are equally as bad to your electronics.

Mud – Mud in the glovebox, quarter panel, trunk or other parts of the interior of the car is a good indicator flood waters penetrated that deeply. Also look at the wiring if it looks extra dry, brittle and crispy it’s likely that this vehicle stood in water.

Stained or mismatched carpeting – If the carpeting is stained or does not match the interior it’s a possible sign that it had to be replaced or is damaged due to water.

Water in oil – You should always take a look at the oil when you’re buying a used car and if the oil does not look up to par. It’s gray, milky or has water in it you’re usually looking at an engine that has problems or will have soon.  One thing to really look at when you’re looking at a car that you suspect of having been damaged in water is to check the oil indicator if it looks like it’s over filled there might be water in the oil causing it to be over.

If Parts Of Your Car Have been Submerged

Dry out the water

As soon as possible you want to open the car up and dry out the water as best as you can. A wet vacuum is quite helpful in sucking out the water in the carpet. Take off the door panels if it’s been that deep in the water. If you know how if not just leave them be and get rid of as much of the water as possible.

Don’t start the car if it has been submerged enough where water has gotten into the glove box or past the air intake. This can cause even more damage.

If water has gone beyond the floorboards you may have extensive damage.

Some of the biggest issues with repair of a car that has been thru a flood are that once it reaches past a point where critical components have been damaged beyond repair its likely going to have long term issues.

Electrical damage – Damaged electrical components like sensors and instrument clusters as well as wiring and onboard computers are probably the biggest issue with vehicles that have been flooded. You ever hear someone say that car has gremlins in it. Meaning stuff works and then it doesn’t work. Well, that is typical with damaged electrical components that have had excessive moisture exposure. That is why it’s usually best to total cars with that problem because it would cost far more than most vehicles are worth to rewire and replace all the electronics.

When is a car considered a total in a flood

Living in Texas with Hurricanes being a regular occurrence it’s good to get some understanding of when is it likely that your car will be totaled if your car got flooded during a hurricane.

Filing an Insurance Claim With your Insurance Provider

If you have full coverage you are one of the lucky ones and will be able to get money to get into a new vehicle. Likely you will take some losses just because you’re likely going to have a $500 deductible and if you have a loan on the vehicle and didn’t get GAP insurance then you may actually be stuck several thousand dollars instead of getting a check you will still have to make several payments before the car is paid off. Well, let’s hope you thought ahead and could afford gap and full coverage and now you just need to get that check to buy another car.

3 Things To Do When You Get Back To Your Car

When you’re looking at buying your next used vehicle let Texas Cars & Autos help you get into a new ride today! We offer financing as well as cash deals.